Although Riverdale is a metropolitan suburb today, with a diverse and dynamic population, it has not always been a suburban community.

Settlers moved to the area, now known as the City of Riverdale, long before the Civil War came to Georgia in the 1860's.

In 1887, a railroad track was built from Atlanta to Fort Valley. There were main stops locally and in a place known as Selina. 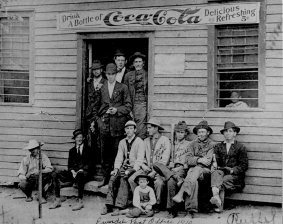 Eventually, the railroad became desperately in need of loads of cord wood, while, at the same time, farmers needed cash. A farmer named Monroe Huie developed an idea to provide wood to the railroad. As a result, farmers began to cut and haul their wood to Rape's Crossing.

Each time the train came to get wood, it would bring fertilizer to the area. Hence, fertilizer sales became the area’s first business venture. Before the spur was built, fertilizer was hauled in wagons from the neighboring town of Jonesboro.

As time went by, the railroad began to have trouble securing adequate land for its business needs such as side tracks, a depot, and housing for its workers. This prompted Mr. and Mrs. W.S. Rivers to make a generous land donation to the railroad; the Rivers owned local land and the town’s entire business district. Their donation allowed the area to become a main stop for the railroad.

In 1908, Mr. G.M Huie, representative of Clayton County, introduced a bill requesting that the town of Riverdale, Clayton County, Georgia, be incorporated. The City was being named in honor of Mr. and Mrs. W.S. Rivers. This bill was passed and charter was granted.

Riverdale has a population of over 14,000 and is the second largest city (population) in the Clayton County.

The City is governed by a Mayor and 4 Council members. Each council member represents the entire city and are elected at-large, though they hail from one of the four wards that divide the city. The Mayor and Council appoint a City Manager, who has oversight over 5 departments.